This week, we’re digging into the suck-cessful archetype of Vampires! This is the most invariant of the archetypes in Ixalan, as splashing other colors is rarely viable in these decks. At the same time, the game plan can vary drastically depending on your curve, so you can go from a midrange version of the deck to a very aggressive one with ease. Let’s take a look at the key cards for vampires, then examine the different sanguine delights of the archetype!

There are several cards that are maximized in Vampires, but the lynchpin for those cards is Anointed Deacon.

Anointed Deacon provides everything you could want in a vampire. It effectively provides a Pirate’s Cutlass for your vampires, and even if you have no other vampires on board, it attacks as a 5/3, which is fine for 5 mana. Anointed Deacon maximizes cards like Queen’s Commission and Legion Conquistador, both of which can end up being irrelevant to the board without an ability to increase their power. Additionally, the bump in power on lifelink creatures ends up turning the damage race so heavily in your favor that aggressive decks like BR Pirates are at a significant disadvantage. A final benefit of Anointed Deacon is that when you have evasive vampires like Skymarch Bloodletter, Anointed Deacon becomes even better because it often forces your opponent to direct removal at it instead of at your evasive threat, allowing you to push through extra damage you might not be able to otherwise.

Two other cards to pick early are Adanto Vanguard and Glorifier of Dusk. 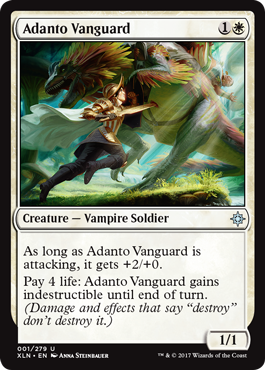 These are two excellent threats that are maximized in a deck with lifelink. Adanto Vanguard is an excellent aggressive threat, and especially when combined with Mark of the Vampire is extremely difficult to deal with. Glorifier of Dusk is a fantastic finisher, and when you have sufficient lifelink its abilities are virtually free, and give you considerable flexibility. Attacking with a vigilant flier makes it much easier to race your opponents, and can be the deciding factor in games against Dinosaurs and Merfolk.

There are two cards in particular I’d like to discuss because of the variability in their value: Bishop of the Bloodstained and Deathless Ancient.

Bishop of the Bloodstained can be very powerful in the Vampire deck, however I have not found it to be a crucial piece of the deck in the way that Anointed Deacon is. While it can deal a lot of damage in some cases, the 3/3 body is overpriced at 5 mana, and it tends to do very little on the board once it resolves. That being said, this is a card I would put in any Vampire deck I’m playing, however I would rarely pick it over Anointed Deacon. Deathless Ancient is another seemingly powerful card that just doesn’t always make the cut for this deck. 6 mana is very expensive for this format, and though a 4/4 flier is a relevant body, you’ll often find yourself needing 2- or 3-mana creatures, and will have to pass on the Deathless Ancient. It can be a good finisher for the Vampire deck, and is a very resilient threat, but again its not nearly as important as Anointed Deacon, and will often be taken after cards like Inspiring Cleric and Bishop’s Soldier. These cards illustrate the importance of being very careful with your picks in the 5- and 6-mana slot; there is a plethora of 5-drops for the Vampire deck, and being selective with those picks will be crucial for maximizing your draft!

Alright, so we have some vampires that can be valuable in the deck, but how do we move into vampires in the first place? Well, there are a few ways! The most common will be picking up a powerful black or white rare and then some of the excellent removal in white and black. Often you will not start out with very synergistic picks, which you will note is really the opposite of when you’re drafting Merfolk, where you really want to pick up synergistic cards early and generally powerful cards later in the draft. Vampires gives you more flexibility for the draft process because picking up synergistic cards isn’t necessary most of the time. You will naturally pick up vampires in the 2-4 drop slot early in the draft, so once you see a vampire card that rewards synergy, you can take it without worrying too much about picking up more vampires.

When your draft starts this way, you will most often move into the more midrange version of the deck, in which you will still prioritize early plays but your powerful late-game cards will allow you more flexibility in your picks. Here, you’ll want to prioritize removal like Contract Killing and Pious Interdiction to ensure that you don’t lose to a One with the Wind or Swashbuckling. The creatures you prioritize will depend heavily on the specific cards you have as top end. For example, having 1-2 Anointed Deacon means you will pick evasive threats like Skymarch Bloodletter and Skyblade of the Legion higher, and that you can also take Queen’s Commission and Bishop’s Soldier earlier than you could without the pump available. If you’ve been fortunate enough to pick up a Sanctum Seeker, you’ll be taking Paladin of the Bloodstained and Queen’s Commission earlier, though the viability of a go wide strategy will depend on how many Anointed Deacon you have.

The more aggressive version of the deck will still want Anointed Deacon to push through damage, however it will focus more on 2- and 3-drops, particularly Territorial Hammerskull and Bishop’s Soldier. This version of the deck will also rely more heavily on combat tricks like Vampire’s Zeal and Skulduggery to preserve your creatures during combat. Evasion is less of a priority for this deck since you can often achieve a higher density of threats than the midrange deck can, but Skymarch Bloodletter will be a high pick regardless. Duskborne Skymarcher is also excellent in this version, as it can attack itself and allow more of your creatures to attack through otherwise stalled boards. Prioritize early threats and combat tricks, but don’t forget about your 5-drops!

A few notes about other cards in these colors. First, Rallying Roar has disappointed me in every deck I’ve played it. Even when you generate a lot of tokens, +1/+1 to the team has been underwhelming, as it doesn’t allow your creatures to survive combat often and it rarely deals significantly more damage to your opponent. There are some matchups where this can be good, particularly if you have a lot of lifelink, but on the whole this is not a great card even in the Vampire deck. Fathom Fleet Cutthroat, on the other hand, is excellent in Vampire decks with a lot of tokens. This provides a reasonably efficient means of removing your opponent’s large blockers, and make their blocking decisions more difficult once they’ve seen it. This can allow you to sneak through a few extra points of damage, and potentially give you the win! Finally, we have Legion Conquistador. This is a card you should not play as a 1-of, and in general I don’t even like it as a 4-of because it means you’ve likely eliminated 4 spots in your deck for real cards. This changes, however, when you have access to combat tricks and multiple Anointed Deacon, at which point the value of drawing three more 2/2’s is worthwhile.

What do you think, do Vampires hit the mark or should they crawl back into their coffins? Comment below!