With the release of Battle for Zendikar there were two new cards that caught my attention for Modern: Endless One and Zulaport Cutthroat. These two cards were very similar to two other cards that have been around in Modern for a while but saw little play: Hangarback Walker and Blood Artist.

The plan is to cast the creatures that cost X for X equals zero, so they enter as a 0/0 creature then die off immediately because of game state checks. This let’s me drain the opponent for a single life. Now to find a way to cast those creatures over and over. 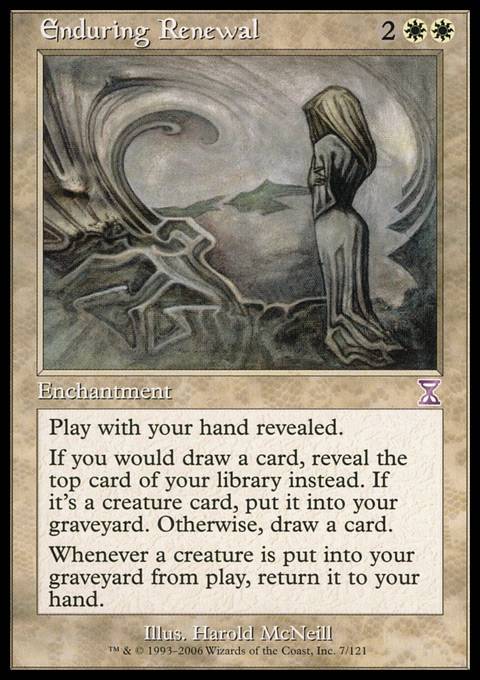 Enter Enduring Renewal. This is a very unusual enchantment originally printed back in Ice Age with one upside and two downsides. The only thing about this card I care about abusing is the text:

Whenever a creature is put into your graveyard from the battlefield, return it to your hand.

Now that’s cool! If we combine this card with one of the black creatures from above while holding one of the colorless creatures in our hand, we can instantly win the game.

Here’s how the combo works:

Not every game of Modern is going to be as easy as putting these few cards into play then winning. We’re going to need some more supporting cards to let us combo off more consistently and provide some resistance to what other unfair decks are doing. Let’s take a look at the decklist:

This has been one of my pet decks for a while. The thing I like most about this list is that each of the combo pieces are redundant, meaning we can represent more than 4 copies in our deck. We have 8 copies of a 0-cost creature, 8 copies of life-drain creatures, and 7 copies of revival effects. Don’t let this deck fool you into thinking it’s only a combo deck. You can always just play your Endless Ones and Hangarback Walkers for value and attack your opponent if their defenses are down.

Athreos, God of Passage provides a very similar effect to Enduring Renewal with the upside of being indestructible. While Athreos doesn’t allow us to combo infinitely right away, he does provide inevitability. With him in play, the opponent is forced to lose at least 4 life each time one of our creatures die (assuming a blood artist effect is in play). If they don’t, then they’ll lose 1 life and we can just replay the dead creature. At 4 life a death, we only need four deaths total before our opponent no longer gets a choice. In other words, Athreos allows our creatures to die only four times in total then after that threshold is met, the opponent is no longer able to choose to pay life and will be susceptible to the full combo.

Tidehollow Sculler, Kami of False Hope and Orzhov Charm are the cards in our deck that allow us to interact with the opponent. The Kami can buy us a lot of time against any aggro deck, especially Infect. Combine Kami with either of our enchantments opens up the possibility of infinite Fog effects. Orzhov Charm serves several purposes in this deck. Aside from destroying opposing creatures, the charm can instantly revive a Kami to prevent damage or revive one of our colorless creatures to get the combo going again. The card represents being a creature threat without being a creature card itself, important because Enduring Renewal won’t let us draw creatures if something goes wrong with our initial combo.

Finally there’s Rally the Ancestors and Windbrisk Heights as the last pieces of our deck. The land helps dig for a combo piece while being reasonably easy to activate; our deck is filled with small creatures after all. Rally offers resistance to opposing disruption. If our creatures are killed off, we can eventually play Rally to buy back our whole combo (even Athreos) in a single card. Rally also doubles our death counter if we’re relying on Ahtreos as a win condition. It can also turn into an instant speed fog or sculler removal for certain decks.

Thanks for checking out this brew. Let me know what you think and if you have any card suggestions then feel free to reach out to me on Twitter.